Get to know us better

A Tradition of Leadership Prior to founding Bandera Ventures, Mr. Anderson was associated with the Trammell Crow Company for over 16 years. Prior to his departure, Mr. Anderson was Senior Executive Director, responsible for the Development and Investment Group for the Western half of the United States. He served on both the Executive and Operating Committees. Before founding Bandera Ventures, Mr. Leiser was responsible for industrial and office developments at Trammell Crow throughout the Dallas/Fort Worth Metroplex as well as having national responsibility for Corporate Build-To-Suits, Airport Development, Healthcare Development, Colleges and Universities and Mixed Use Developments.

Mr. Leiser obtained his BA from Indiana University, JD from Indiana University School of Law, and MBA from Southern Methodist University, each with honors. He is active in the National Association of Industrial and Office Parks (NAIOP) as well as the Real Estate Council where he was a Founding Member of Dallas Sixty. Tom is on the board of Vision Africa, a ministry focused on spiritual and health issues in Nigeria, and an Elder at Highland Park Presbyterian Church.

Before joining Bandera Ventures, Ms. Kreditor spent 18 years as a Financial Manager at Trammell Crow Company and then as a Managing Director of Crow Holdings. While there she provided financial and asset management for development, acquisition and disposition of office, retail, and industrial projects.

Ms. Kreditor lives in Dallas with her husband Mark and has two daughters and two granddaughters. From 2014 to 2021, Matt was part of Hines’ New York development team, most recently serving as a Managing Director overseeing the development of One Madison ($2.3B project). While at Hines, Matt also served as portfolio manager of the 12-building, 5.8 million SF Hudson Square Portfolio, managed the financial aspects of One Vanderbilt ($3.3B project), and coordinated new business activities for the New York Office.

Matt is a graduate of The University of Texas, where he earned a BA in Plan II Honors and a BBA in Business Honors/Finance and was active in Texas Cowboys. Matt lives in Dallas with his wife Ashley and children Avery and Charlie. Jack joined Bandera Ventures as their Retail Partner focusing on the acquisition of neighborhood shopping centers throughout the United States.   Jack focuses his time on sourcing suitable investments, placing debt at acquisition and asset management.  From 2012 to 2020, Jack was a senior asset manager at a Dallas based family office with assets in excess of $1 billion where he was involved in acquisitions and dispositions, leasing, retail development and asset management, completing transactions in over thirteen states.   During his tenure with the family office, Jack was responsible for overseeing more than $750 million of acquisitions and dispositions.

Jack is a graduate of Southern Methodist University where he received his BBA in Real Estate Finance from the Cox School of Business.   Jack grew up in Dallas and continues to reside there with his wife Sarah and their daughter Annie. 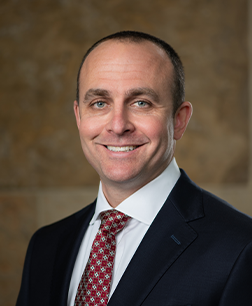 Mark obtained his BA from Michigan State University. He earned his MBA from the McCombs School of Business at the University of Texas at Austin where he concentrated in Real Estate and Entrepreneurship.

Prior to business school Mark served for over six years in the US Navy as a member of SEAL Team Seven where he deployed to Iraq twice, Thailand, and the Philippines. Marty combines extensive knowledge of the legal and financial realities of development deals with deep expertise in real estate asset strategies. His experience with real estate development and investment across the sunbelt—from Washington DC to California—is unparalleled. His architectural training, real estate law experience, and financial fluency make him a valuable ally in transactions across all product types.

He spent years as regional managing director at Trammell Crow, along with the other Bandera Ventures Partners, before becoming a partner in the real estate group at the investment bank, Alvarez & Marsal, where he used his legal and financial expertise to consult on real estate asset strategies and restructuring. He went on to serve as vice president and general manager at Opus South, then became a founding partner at Weeks Robinson Properties. It was there that he put together a highly successful $400 million opportunity fund to develop industrial assets throughout the southeast. He is known for successful third-party development opportunities he creates and for his facility in securing institutional capital.